From Alexander Hamilton to Junichero Koizumi

We are pleased to announce the publication of our latest book: Common Foundations of American and East Asian Modernisation: From Alexander Hamilton to Junichero Koizumi. 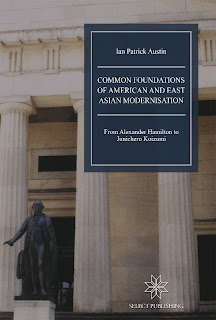 This book is an extensively referenced exploration of the influence outside the United States of the ideas of Alexander Hamilton (1755-1804), the US's first Secretary of the Treasury. In it, Ian Austin rejects the position perpetuated by neo-classical economics about the universality of “free market” and “free trade” economics. Austin shows that the US, Great Britain and Germany had all employed state intervention to protect their national interests at various points in their economic histories. Meiji-era Japan, learning from the US and Germany - as convincingly shown by Austin - adopted similar state-driven economic policies to develop rapidly. Post-1945, the same system of state-driven economic planning and execution was crucial in the economic recovery and growth of Japan and its former colonies, Taiwan and South Korea. Thus, contrary to popular belief, Asian countries and the US share common foundations in state intervention to promote economic modernisation.

The book was written over a period of 5 years, and yet its launch in 2009 could not be more timely. The global financial crisis beginning in 2008 has driven states around the world, including “free market” advocates like the US and Great Britain, to take drastic and dramatic interventionist measures. Austin shows that such interventions are not new, and indeed, will continue to be necessary in the future.

The author, Ian Patrick Austin, is an Australian researcher on American and East Asian political economy and currently works for Edith Cowan University, Perth. He is the author of Pragmatism and Public Policy in East Asia: Origins, Adaptations and Developments (2001), Changing Faces of ASEAN (2002), Goh Keng Swee and Southeast Asian Governance (2004) and papers, chapters and bibliographies on Asian and American affairs. Ian has worked in Australian, Singaporean and British tertiary institutions, researching and lecturing on international political economy and management; as well as in international businesses focusing on consultancy, events management, marketing and logistics. He has public policy and electioneering experience from participation in federal, state and local elections in Australia.
Posted by Select Books at 9:01 PM No comments:

In recent months, Select Books has been appointed as the distributor for a number of books on art and photography. It’s a fairly new area for us as far as distribution is concerned, but we’re pleased to have made a start. It’s certainly opened our eyes to the quality of these works:

Posted by Select Books at 9:59 PM No comments:

Select Books recently launched a new children's books imprint - Autumn Wonders. Why? Well, an area that we've always wanted to get into was children’s books with Asian themes. In fact, one of the first tweaks at the bookstore after we took over was the expansion of the children's books section. Since then, we’ve kept an eye out for books that are both appealing to children and promote awareness of the culture and heritage of Asian countries. We're confident that we now have a very good collection of children's book with Asian themes.

Of course, it’s not just the children we’re thinking of: we get a lot of joy ourselves from receiving new children’s books – as evident by the “oohs” and “aahs” in the office whenever we open a newly arrived carton to find a particularly well-illustrated one. Some of the recent titles we especially like are: A Glowing Tale by Nathalie Chen, In Search of the Prophet by Shahrukh Husain & Samira Shackle and Monkey: The Classic Chinese Adventure Tale by Seow, David.

On the publishing side, it's taken a little longer, but we now have a couple of good children's book projects in the pipeline. Hence, the timely creation of the Autumn Wonders imprint. In fact, we're currently working hard on two children's book series, and considering a third one. These were made possible through grants from the Media Development Authority and National Heritage Board, for which we're grateful - these grants can really make the difference whether a project is viable.

We're also on the lookout for more quality children's books projects that we can do. So do contact us, whether you're a writer or an illustrator or a publisher looking for a partner. If nothing else, we’re always eager and ready to talk about children’s books!
Posted by Select Books at 11:04 PM No comments:

We recently met with Marijn van der Laan, a Dutch national living in Singapore, who has created an interesting "story-sharing" website called Singapore Treasures. It's a site for folks, both Singaporeans and foreign, to share stories and links about Singapore, particularly hidden aspects of Singapore - hence treasures. It's a little like a team blog or a sort of YouTube for stories.

There is a range of writings posted, including observations and fiction. It's still a fledgling site, with only a handful of stories currently, but the premise is an interesting one. After all, few of us have the talent to become award-winning writers, but many of us will have stories worth sharing. And few people have the time to blog regularly or be able to attract a large number of readers to their blogs, so it's useful to have such a site to post the occasional lengthy observations or acerbic comments about life! The creators also aspire to one day compile all the stories into a book, so on one level, it's also a book in the making.
Posted by Select Books at 9:24 PM No comments:

From April 2009, Select Books will be the Singapore distributor for Perara Hussein Publishing House (Ph), a publisher based in Sri Lanka. Ph is a fairly young setup - it was established only in 2003 - but it has progressed in leaps and bounds. They work with both emerging and established writers, and pay close attention to ensuring high quality in both the literary content as well as production value of their books. Already, they have a substantial list, with several titles long- and short-listed for various literary prizes.

Moon in the Water by Ameena Hussein was on the long list for the 2007 Man Asian Literary Prize.

Learning to Fly by Shehani Gomes was on the short-list for the 2005 Gratiaen Prize. The Gratiaen Prize is a literary award in Sri Lanka established by Michael Ondaatje, who won the Booker Prize in 1992 for The English Patient, and used the prize money to establish the award.

The Sweet & Simple Kind by Yasmin Gooneratne was on the short-list for the 2007 Commonwealth Writers' Prize.

We look forward to representing them in Singapore.

Posted by Select Books at 9:02 PM No comments:

Role of a Specialised Book Store

Select Books has been around since 1976. That's a long time for an independent book store with a very niche focus. Ms Lena Lim, founder and former managing director, did a great job building it up and keeping it going, despite some hard times during past economic recessions. As we plunge into the depths of another recession, we've been doing some soul-searching about what our business proposition is.

In the old days - actually not very ago by historical standards but long by today's standards! - Select was essentially a broker; a middle-man for folks who needed hard-to-find books on Southeast Asia. Select sourced for these books and brought them together under one roof. Researchers, academics, librarians, politicians, civil servants, and anyone else who wanted to get hold of books on Southeast Asia, came to Select because it was the easiest way and, often, the only viable way, depending on the particular fields they were interested in. American, Danish and Japanese academics and librarians came on special buying trips to Singapore, and to Select specifically. Select had the expertise and the wherewithal to find these great books and to make it easy to get them into the hands of people who needed them. We were not really a merchandiser; we were a service-provider.

While lamenting about this phenomenon to a well-known writer and researcher recently, I was pleasantly surprised when he sighed and pointed out that he had found that he still need to come to Select Books for some research requirements, albeit not as much as before. Why? Because language is still a problem - an Indonesian book publisher with an English-language book might not have an English website. Because payment is still a problem - some book sellers do not accept credit cards because of credit card fraud concerns; some book sellers you don't trust with a credit card; and bank drafts and postal orders are a pain. Because Select is still an excellent source of information about Asian and Southeast Asian books. And finally, because nothing beats the pleasure of browsing at a bookshelf and discovering an obscure book.

Recently, we've also had the pleasure of having teachers from various different schools visit us (separately). They had heard about Select Books and came to check us out. All were pleasantly surprised at the range of books that we carried - many of which they had not seen elsewhere, not because the books are rare in any sense, but because in our cosy book store, we've been able to bring all the related titles together in a way that was easy for them to find.

So, there is still a role for an Asian Book Specialist.
Posted by Select Books at 10:37 PM No comments:

Select Publishing recently launched a new imprint Celestial. The inaugural title under this new imprint is Young Singapore Through Their Eyes. It was a real pleasure to publish this book.

The whole project was initiated by a group of four spunky young girls from Nanyang Girls' High School. In 2008, they successfully organised a writing contest for primary and secondary school students called "Your Singapore Through Their Eyes: A Literary Competition". That's quite a significant achievement for four 15-year-olds, but they didn't stop there. They persuaded Nexus and the National Youth Achievement Award Council to support the publication of a anthology of some of the works submitted in the contest. That's where we came into the picture. 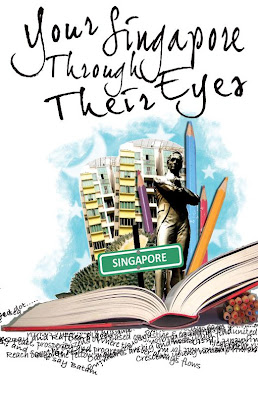 We advised the girls to organise the essays, poems and plays along thematic lines; and to write an introduction to provide an overview of the themes and works. Clara, Dileen, Kay Yun and Ee Hsien did a fantastic job editing the works, organising the content and writing the introduction. They also roped in a schoolmate, Andrea, to design a beautiful cover. All we had to do was hold their hands along the way; they did all the hard work. It's a book we're all proud of. It's here on the Select Books website.

The book will be given away to the contributors, schools and National Library. Unfortunately (from the perspective of folks who might want to get hold of a copy), it's not for sale. Fortunately, we have 5 copies. We're not going to sell these, but if you want to take a look at what five resourceful girls can do, drop by the bookstore to check out our copies.
Posted by Select Books at 10:11 PM No comments:

Welcome to our blog!

After many years of procrastinating, we've finally taken some baby steps to improve our web presence. Our website www.selectbooks.com.sg was recently revamped. It looks pretty much the same as the old one, but don't fret - it's now going to be updated much more frequently, so you'll see new titles appear almost as soon as we receive them.

So, to old friends of Select Books: this is another way to stay in touch. And to those who have just discovered us: we are confident that you will be pleasantly surprised by how we can meet your needs for Asian books.
Posted by Select Books at 6:31 PM No comments: