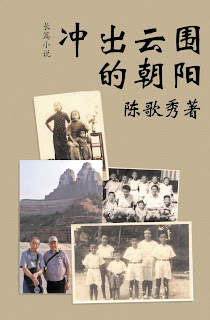 Select Books is proud to announce the publication of our first Chinese book - 冲出云围的朝阳 (The Morning Sun Breaking Out of the Clouds).

It is the first book published under our new Chinese imprint 精选.

This is a novel about the life of a Hainanese family from the late Qing dynasty to the present time. In it, one follows the story of how the family survived great hardships in a poverty-stricken village in Hainan, China and found hope and future in their adopted land of Singapore.

It tells of a determined and resourceful young man who started life in colonial Singapore as a coffee-shop assistant, peddling bread and kaya on a rickety bicycle along the streets of Katong who later overcame the odds to become a successful contractor for the British colonial administration.

The author traces the difficult life the family led, especially during the unsettling days of the Japanese Occupation and the turbulent fifties. However, the trials and tribulations did not deter the third generation of the family, who found success in different pursuits around the world.

Written with a fine journalistic eye honed through a long career as a reporter in a local Chinese daily, the author brings a strong humanistic touch to this vivid and often moving portrayal of events and personalities, not just in Singapore and Hainan, but also in Vietnam, Cambodia, Thailand, Pakistan, and Canada.