Photos from the talk by Tay Wei Leng, author of Convergence, on Saturday, 18 May at Select Books. 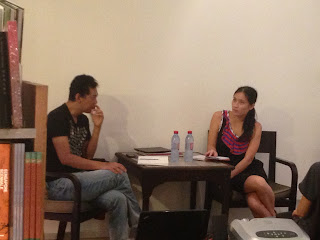 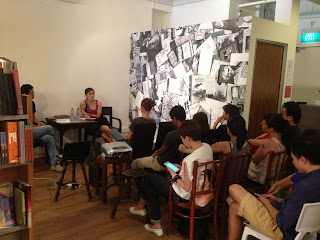 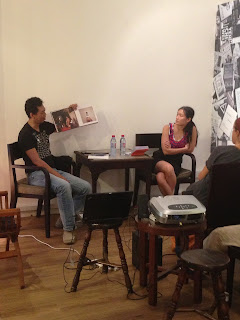 Posted by Select Books at 3:20 PM No comments:

Due to unforeseen circumstances, the talk by Thierry Falise on Saturday, 18 May, at 2pm, has been cancelled.

However, the talk by Tay Wei Leng, author of Convergence, on the same day (Saturday, 18 May) at 3:30pm, is still going ahead.

Comprising 65 images, Convergence is an intimate look at segments of the Chinese community in Singapore and Malaysia by Singaporean artist Tay Wei Leng. The book questions and records the changes current generations experience as they grow increasingly distant from their grandparents’ homeland, as attitudes and values shift with each generation. It also looks at how this Chinese community has evolved with characteristics shaped by the co-dependent history, and social landscapes particular to Singapore and Malaysia.

In conversation with Ahmad Mashadi of the NUS Museum, Tay Wei Leng will discuss her process and research for the project, followed by book signings.

We look forward to you joining us at 51, Armenian Street, for the fascinating talk and booksigning by Tay Wei Leng. 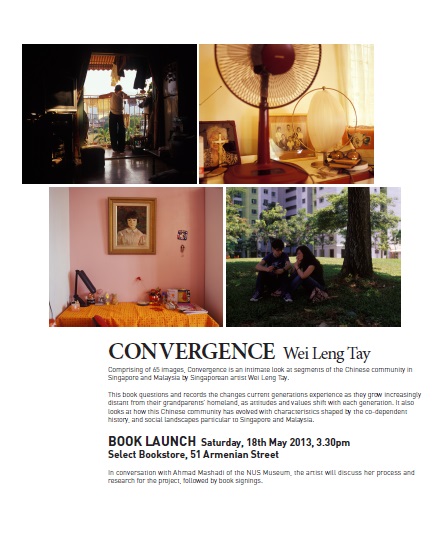 Posted by Select Books at 3:47 PM No comments:

Select Books is pleased to announce the publication of our latest ebook: Mosquitos and Singapore by Ted Wilkins. 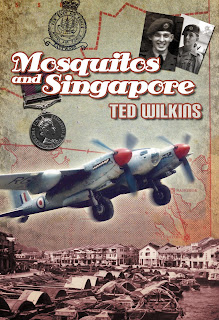 This true story covers the three years during which a young RAF serviceman was called up for National Service and transported to Singapore from war-torn and rationed England for a “tour of duty” on 81 Photographic Squadron at Seletar Airbase in Singapore.

Based on diaries, notes and letters written at the time, Ted Wilkins describes life on the Squadron and the aerial survey work concerning the “terrorists” during the Malayan Emergency. His autobiography also captures all the flavours and excitement of life on this fantastic island during the early fifties. Reminisces include a Malayan wedding, a visit to the Tiger Balm gardens, the Mosque at Johor Bahru and a picnic trip to adjacent islands. Through these pages, the author warmly describes how he embraced the customs and livelihoods of the island’s pleasant, always smiling people.

Written in a humble manner, this book brings to life all the excitement of exploring a new and fascinating country, so far removed from the author’s previous country life at home. The climate, the people, all the hustle and bustle, the flowers, the clothes and colours of this “magical glamorous island”, are all lovingly captured in a remarkable way.

About the Author
Ted Wilkins was born at Ruishton nr Taunton. His family moved to West Chinnock, then Bridgwater and finally to the small country town of Crewkerne in Somerset. Educated first at St Bartholomews School and after passing the Eleven Plus exam, he moved on to Crewkerne Grammar School where he attained his School Certificate.

Ted joined the Air Training Corps and upon leaving school, joined Westland Aircraft Ltd as an apprentice aircraft engineer. He became involved in many activities in the town, playing cricket for the Town club and winning the Area Cup doing Amateur Dramatics but all this was interrupted when he was called up for National Service. Not ever having been out of Somerset this became a real adventure as he suddenly found himself posted to the other side of the world, to Singapore. There, he joined the elite 81 Squadron who were busy doing aerial surveys of the Far East as well as being involved in Operation Fire Dog.

When demobbed, he returned to Westlands, but then left for Blackbushe to work for Airworks, a civil aviation firm. Returning once more to Crewkerne he changed to the upcoming plastics industry and studied at Yeovil Technical College as well as becoming an active member of The Royal Observer Corps. He joined Peter Hodge and Associates as their site engineer and became responsible for overseeing the production and erection of cladding panels on such challenging buildings as Mondial House in London, the Radio Chemical Centre at Cardiff and the American Express Headquarters in Brighton.

Lastly, he joined W&J Tod Ltd, the well known glass/fibre boat builders. Here he was instrumental in the introduction of new production techniques using autoclaves and pre-impregnated woven fabrics for use in aviation products.

Mosquitos and Singapore is available at:

Mosquitos and Singapore will also be available on Sony very soon.
Posted by Select Books at 8:27 AM No comments:

Book Launch: Where I Was by Constance Singam

A CELEBRATION OF CIVIL SOCIETY


WHERE I WAS
A MEMOIR FROM THE MARGINS

WHERE I WAS: A Memoir from the Margins is a rich, funny and compelling account of the life of an extraordinary woman. It is filled with anecdotes, both humorous and moving, of her colourful life, from early years in Kerala; her teenage years and adult life in the country of her birth, Singapore; and her journey from being an apathetic innocent citizen to a committed civil society activist.


"Constance Singam is the mother of civil society. She has inspired many generations of civil society activists and has provided invaluable historical perspectives and relevance to the work we do on the ground. Her boundless energy has been responsible for numerous projects and initiatives that have shaped Singapore's civil society today."
- Alvin Tan, Founder and Artistic Director, The Necessary Stage.

Please RSVP with your name, contact
and number of persons to:
kimberly.wang@tpr.sg 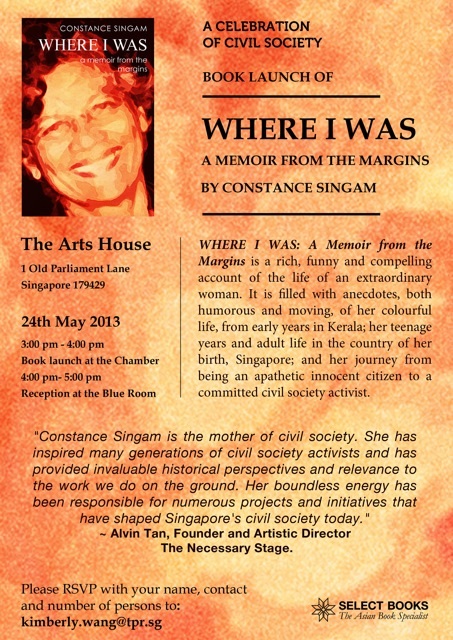 Posted by Select Books at 8:52 AM No comments:

Books on the Early Music Scene in Southeast Asia

These are books on the early music scene in Singapore, Malaysia, Indonesia and Thailand:

Malaya's Early Music Scene: Musika - Arena Muzik Silam Di Malaya by Azlan Mohamed Said. Many archival photographs are included in this insider's account of Malaya's music scene 1900-1965, a period of close Malaya/Singapore interchange. The first section overviews the history of Malay music, traditional songs and the early 20th century's Bangsawan opera, and gramophone and radio music. This music scene and Japanese policy 1942-45 and the 1045-65 developments in Radio Singapura, in cinema and entertainment hubs and at functions are then described. Inset photographs and biographical summaries are given for some 90 artistes and performers, and the role of musical groups noted. With bibliography, online database and index. Bilingual in Malay.

Apache Over Singapore: The Story of Singapore Sixties Music Vol. 1 by Joseph C. Pereira. The Cliff Richard and the Shadows concert in November 1961 opened the floodgates for Singapore pop music. It and subsequent pop music developments made for a very exciting pop scene in Singapore as there were releases to look forward to every week from EMI, Philips, Decca and other record companies, including local labels. With shows almost nightly and tea dances to welcome the week it was pop heaven. This book examines why it was so. Individual profiles of the bigger acts study their careers in details and trends like rhythm and blues, the blues movement and pyschedelia are examined. The attitudes of officialdom to this phenomenon in Singapore as well as other factors like the infrastructure that helped the sixties pop music movement are also discussed.

Makyung: The Mystical Heritage of Malaysia by Rahimidin Zahari; Sutung Umar RS et al. Awarded the Masterpiece of the Oral & Intangible Heritage of Humanity award in 2005 by UNESCO, Malaysia's Makyung is a veritable feast for the senses. The haunting strains of the bow drawing across the strings of the rebab signal the beginning of this mystical traditional dance theatre and a sensory mosaic of gestures, singing, music and dancing follow suit. This book take readers into the world of a beautiful yet mystical ancient theatre that is carving a niche in today's contemporary arts scene.

Musical Worlds In Yogyakarta by Max M. Richter. Musical Worlds in Yogyakarta is an ethnographic account of a vibrant Indonesian city during the turbulent early post-Soeharto years. It examines musical performance in public contexts ranging from the street and neighbourhood through to commercial venues and state environments such as Yogyakarta's regional parliament, its military institutions, universities and the Sultans palace. It focuses on the musical tastes and practices of street workers, artists, students and others. From street-corner jam sessions to large-scale concerts, a range of genres emerge that cohere around notions of campursari (mixed essences) and jalanan (of the street). Musical worlds addresses themes of social identity and power, counterpoising Pierre Bourdieu's theories on class, gender and nation with the authors alternative perspectives of inter-group social capital, physicality and grounded cosmopolitanism. The author argues that Yogyakarta is exemplary of how everyday people make use of music to negotiate issues of power and at the same time promote peace and intergroup appreciation in culturally diverse inner-city settings.

Thai Popular Music (Thai Popular Culture Vol. 1) by Gerhard Jaiser. Thai Popular Music is an analysis of luk krung, luk thung, phleng phuea chiwit, and Thai pop, forms of music played for both rural and urban audiences in Thailand. Luk thung is used also as a political tool, as rural Thais become more politically aware. Music plays an extremely important role in Thai society. This study gives a comprehensive overview of the development of Thai popular music since the 1930s and an in-depth look at the principal different musical styles. It also provides an analysis of popular music as a mirror of different social groups in Thai society. Translations and interpretations of a selection of seventy-seven representative songs are given. An annotated index of artists can serve as a basic dictionary, and an accompanying Youtube channel features performances of all the music discussed in the book. Further volumes on other aspects of Thai popular culture will follow.
Posted by Select Books at 3:43 PM No comments:

Select Books is pleased to invite you to join us for an afternoon of fascinating talks on photography on Saturday, May 18, 2013.

At 2:00pm, there will be a talk and booksigning by Thierry Falise, author and photographer of Burmese Shadows: Twenty-Five Years Reporting on Life Behind the Bamboo Curtain.

Following this, at 3:30pm, there will be a talk and booksigning by Tay Wei Leng about her book Convergence.

About Thierry Falise and Burmese Shadows
Thierry Falise is a Bangkok-based Belgian journalist, award-winning photographer, author and recognised expert on Burma, who has been reporting from within Burma each and every year since 1987. He has reported on a range of Southeast Asian issues with AP, Time, Newsweek, New York Times, The Sunday Times, South China Morning Post, Der Spiegel and Die Welt since 1986. He is represented by established agencies GAMMA and ONASIA.  He has published three books in French.

Burmese Shadows is an unprecedented body of work highlighting the reality of life for ordinary people in Burma through stunning photographs. Covering 25 years, it highlights, with stunning photographs, the reality of living and fighting for survival for ordinary people in Burma. These harsh realities, however, are juxtaposed against the vibrant and rich traditions and cultures which combine to make the enigmatic country that is Burma.

Comprising 65 images, Convergence is an intimate look at segments of the Chinese community in Singapore and Malaysia. This book questions and records the changes current generations experience as they grow increasingly distant from their grandparents’ homeland, as attitudes and values shift with each generation. It also looks at how this Chinese community has evolved with characteristics shaped by the co-dependent history, and social landscapes particular to Singapore and Malaysia. Convergence explores the ways of life and relationships of these people and reflects the ideas of race, heritage and language that are ingrained in the community. 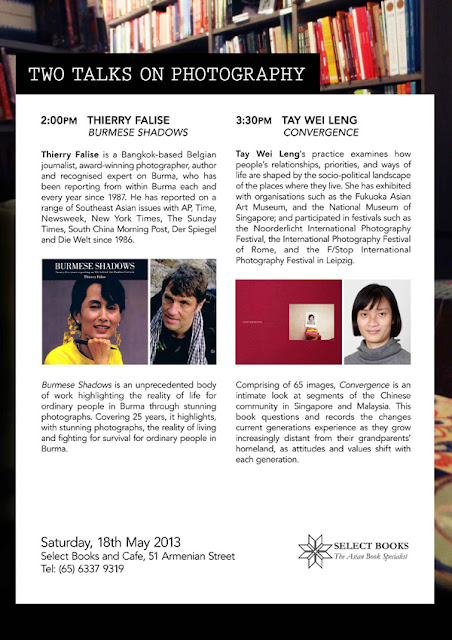 Posted by Select Books at 4:10 PM No comments: